Hero of the Month

Hero of the Month 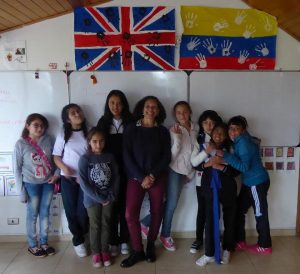 Our hero for the month is Sonia Deighton

I first arrived in Colombia in the spring of 2015 as a visitor. I stayed for 2 months and fell in love with the country and the people.

I had recently left the Middle East, (having spent many years living and working there), my sons were grown-up and pursuing their own careers and I was ready for a change of scenery and direction.

I decided that I wanted to work in Colombia with a charity and preferably helping women. Therefore, I studied to become a Teacher of English as a Foreign Language and upon qualification, I replied to an advertisement placed by Santa Maria Foundation (SMF) who were looking for a qualified, British, English language teacher on a voluntary placement for 4 months.

I was offered the job and arrived back in Colombia in January 2016 as the sole English teacher at SMF.

It became clear after a couple of months that I had found my ‘perfect’ job. I fell in love with the girls and with the ethos and commitment of the Foundation and its workers.

During this time, I gained the trust and love of the girls who attended SMF. I diverted from the traditional way of TEFL and wrote my class plans based on the abilities – both emotional and academic – of the girls. This proved to be fairly effective, and the girls started to become, if not, 100% proficient in English, then almost certainly, confident in attending English lessons and trying to converse in English.

Due to the high level of emotional and physical trauma suffered by many of the girls, I introduced relaxation, breathing, stretching exercises (based on my beloved practise of yoga) and aromatherapy. This was to help the girls find their own coping strategies and maintain a calm, loving, open environment in my classes.

I left the Foundation last summer in order to spend time with my family in England. This was a very traumatic process for us all at SMF. However, after a few months in England it became clear that my heart and mind were still very much in Colombia. I returned to the Foundation in January 2018 and have recommenced my involvement as a teacher and mentor to the girls.

My passion in life has always involved caring for people. At SMF, I want to make a difference to the lives of the children, both in the short and long term. Given the correct guidance, love and attention, we all have the capacity to change and to fulfil our dreams. This is what keeps me going at SMF